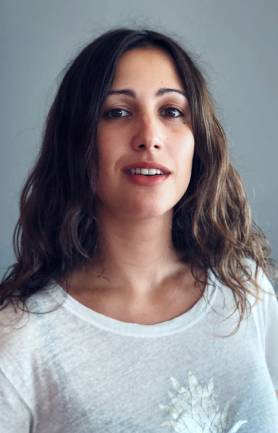 What languages do you work in as a voice talent?
Spanish.

What types of voice overs do you do?
Advertising, audio books, radio fiction...

Have you ever done any acting in theatre or film?
I have been studying theatre for 5 years and have presented several theatre pieces, two of them of my own creation.

If you’ve done work as a dubbing artist, have you ever dubbed anyone famous?
Dakota Johnson, Ana de Armas in Blade Runner 2049, Karen Gillan in both new Jumanjis, Beyoncé in The lion King and Brie Larson in Captain Marvel.

How long have you been a voice artist?
7 years.

Have you done any work as a voice actor that stands out or you consider your best work?
I am a regular presenter on Página Dos (TVE2 programme) and the female corporate voice for Europa FM.

When did you realize you were good at doing voice overs?
Ten years ago, when I did a casting.

Do you have a funny anecdote about a voice over job you’ve done?
I was once directed in an English speaking Spanish film, not only by the dubbing director, but also by the film's director. I also met the author Almudena Grandes after interpreting the main character of one of her books.

What compliments do you get about your voice?
That it is seductive, perhaps?

Do you have a hobby or passion relevant to voice overs that you’d like to comment on?
I love theatre and radio theatre! In fact, I created a radio theatre company called VersusTrac.

Laura is a regular presenter on TVE2 and has recently voiced Ana de Armas in the blockbuster Blade Runner 2049.