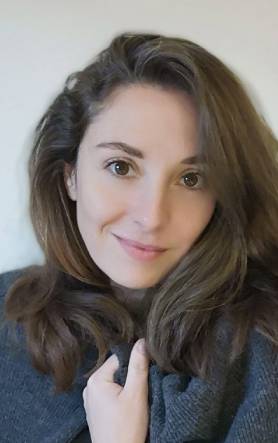 What languages do you work in as a voice talent?
French.

What languages do you speak well enough to work in?
French, English and Spanish.

Have you ever done any acting in theatre or film?
Yes, I'm a profesional actress. I've been acting in many plays for theatre and Opera. I'm also a theatre, diction and oral expression teacher.

If you’ve done work as a dubbing artist, have you ever dubbed anyone famous?
Saoirse Ronan and Natalia Dyer.

How long have you been a voice artist?
5 years.

Have you done any work as a voice actor that stands out or you consider your best work?
Well it was a pleasure to work on The Seagull, as Saoirse Ronan's voice. Also, Dubbing a movie based on a Tchekhov's play is amazing for an actress.

When did you realize you were good at doing voice overs?
When studio Directors and engineers told me so.

Do you have a funny anecdote about a voice over job you’ve done?
One day I was dubbing a horror film and a huge storm shut down the whole system. Ten minutes later, water started entering in the studio… That was a little bit strange, but we laughed a lot thinking about the prophecies of the film we were working on.

What compliments do you get about your voice?
That my voice is shiny, dynamic, and pretty, but also that I can modulate it very well to give a warm, deep and sensual touch to what I'm working on.

Do you have a hobby or passion relevant to voice overs that you’d like to comment on?
I'm an actress and a singer so it seems to be relevant enough.

Young actress and singer who dubbed Saoirse Ronan and Natalia Dyer. She also plays in theatre and Opera.