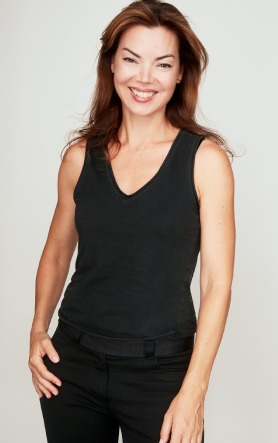 What languages do you speak well enough to work in?
Spanish and English.

What types of voice overs do you do?
Dubbing, advertisements and animation.

Have you ever done any acting in theatre or film?
I've been working as an actress professionally in TV and film for over 25 years.

If you’ve done work as a dubbing artist, have you ever dubbed anyone famous?
I did the voice of Elsa Pataky.

How long have you been a voice artist?
10 years.

Have you done any work as a voice actor that stands out or you consider your best work?
I did 2 voices for a cartoon that will be released soon but can't say the name of the program yet.

When did you realize you were good at doing voice overs?
For as long as I can remember, I've used sound effects and do voices to tell stories. As as actress I thought voice work would be a natural transition. It's hard to say exactly when I realized I could do this for a living.

Do you have a funny anecdote about a voice over job you’ve done?
We were looking for the voice texture and timbre of a very unique cartoon character. Working closely with the writer/director playing around with many different ideas it was very exciting when we found it.

What compliments do you get about your voice?
People are happily surprised at some of the voices I can do. Ones that do not match my physique.

Do you have a hobby or passion relevant to voice overs that you’d like to comment on?
Acting and voice work are my biggest passions. After that I would have to say dancing puts an immediate smile on my face.

Lilliana brings over 25 years of acting experience into the sound booth. She’s great at dubbing and