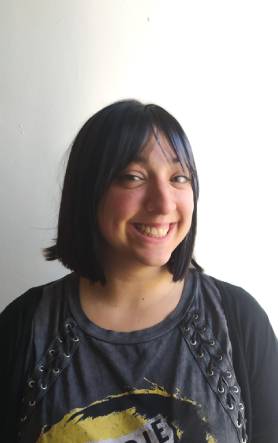 Have you ever done any acting in theatre or film?I’ve done amateur musicals like Grease and Chicago and I’ve also done street theatre at renaissance festivals.

How long have you been a voice artist?
3 years.

Have you done any work as a voice actor that stands out or you consider your best work?I’ve dubbed a number of cartoon series and documentaries for Catalan television and cinema.

When did you realize you were good at doing voice overs?
About 5 years ago when I turned 20.

Do you have a funny anecdote about a voice over job you’ve done?
I used to dub a regular character in a cartoon series and once I had to dub that character and another character who were talking to each other so I dubbed a scene where I had to talk to myself.

What compliments do you get about your voice?
That it’s sexy.

Do you have a hobby or passion relevant to voice overs that you’d like to comment on?
I also work in cinema and audiovisuals as an editor.

Mireia dubs cartoon series and films for Catalan television and cinema. She has a few years of experience and she is very reliable.